With spring comes wine festivals, with Franschhoek Uncorked’s September weekend festival leading the way – and a great day, on Saturday at least, they had for it. Blue skies, much sun and a mood to dispel all that winter rain and gloom. 17 wine farms are open for business all day from 11 till 5, introducing new vintages, discounting old ones, dressing up and playing games, putting on live music and just generally having a good time. What’s not to like?

Franschhoek Uncorked is a festival with, it seems to us, three main objectives – the first two being to launch new Franschhoek wines and, more cynically, to offload older ones. Of course it isn’t billed as such, and it’s wrapped in a veneer of free wine tasting, sometimes debatable live music and a range of quirky activities. But if the spring sun is out and you’re in one of the most scenic valleys in the Winelands, why not have some fun (objective three)?

Not every Franschhoek wine farm participates in Franschhoek Uncorked but some big names do, so there’s no shortage of good wine to try. Some are a bit off the radar – either because they’re one of the few farms not to submit wines to the not-quite-ubiquitous Platter wine guide or because they’re small scale and sell mostly from the farm. So there are discoveries to be made.

Vrede en Lust is not quite the starting point of the event from the Cape Town side (American-owned, Mexican-restauranted, flavoured olive oil producer Noble Hill is – and is well worth visiting for its wines too, not least their elegantly packaged Longest Day Sauvignon Blanc) but it did have one of the best vibes, helped by the popular throw-a-ball-into-the-vines competition… and raunchy fish-netted theme. And then there were the wines – off piste Vrede en Lust (listed in Platter but no wine reviews) revealed a fine and unusual five-way white blend called White Mischief, which was probably the wine bargain of the day at R42/bottle: excellent value. Their Elgin-graped Casey’s Ridge Sauvignon was also quaffable at R40. Value to be had – plus the prospect of a new venture at what was once Cotage Fromage, the previous restaurant on the estate. Lust (natch) had opened three days before, was already baking wood-fired bread (bought, tasted, recommended) and was promising to revive the deli too. Worth watching…

Next on our list was the other end of the trail, Haute Cabrière. Fabulous views but no other surprises here bar the chilled Unwooded Pinot Noir, which was really a beautifully dry Rosé: on the skins for just 8 hours and, by their own admission, ‘a red wine made in a white wine way.’ Perfect for hot summer braais, I’d say. 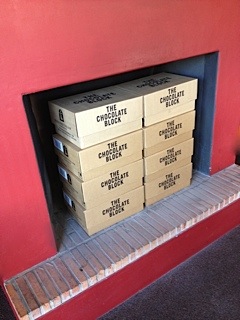 Then came a place we’d never quite got to but had had on the list for a very long time: highly lauded Boekenhoutskloof, who were launching their über-marketed new 2012 Chocolate Block vintage that day… mainly Shiraz again this year, it remains class in a glass. And the tasting room with a view is equally elegant. We would have stayed longer but there was more new ground to cover.

Four Paws intrigued us – the name, the large white paw prints leading you along the road and, on arrival, inked onto our faces, told us we were in the presence of a more relaxed approach to winemaking. And so it proved – chalked directions to art, wine, cheese and food on the floor – friendly service at the wine table, perfectly good wine at good value prices, some excellent cheese from the former cheesemaker at Forest Hill, now calling herself Madame Fromage (the chilli brie is especially good) and the culinary delights of the Limoncello Food Van, whose chicken Panini and creamy vegetable risotto were very fine indeed. Along with the presence of several cute paws – mostly dogs, the cats were scarce – it was a splendid detour. Sauvignon 2011 the best bargain to be had, along with their very own olives and lemons (free for the taking). 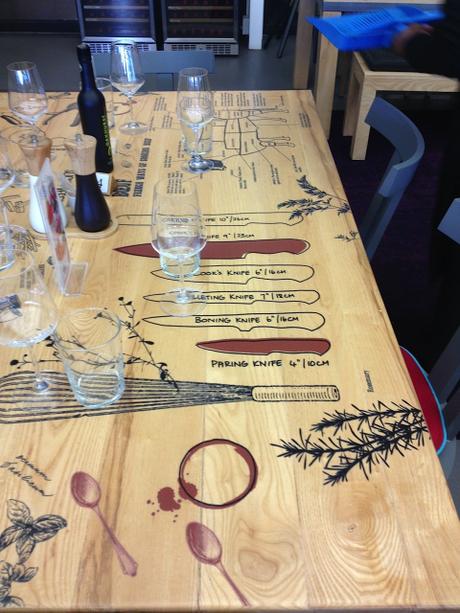 Our next stop was a world away and a place whose reputation for style and cooking classes had been well trumpeted – Leopard’s Leap. And a leaping bronze leopard there surely was. Here just three wines were on offer for tasting – all fine value and super-quaffable, as is the Leopard’s Leap style, although the upcoming Culinaria range of wooded whites and reds, plus a bubbly, look to be aiming for something a bit more serious. In the meantime, the moated, cantilevered, open-plan modern space that is their tasting room-cum-restaurant-cum-kitchen shop is very slick. The cooking-class tip designs etched onto their table are quirkily original and the misters on the verandah will no doubt be essential come high summer. A great place to hang out but I suspect it gets crowded and loud: it certainly was last Saturday. So, the slightly rowdier but nevertheless fun sister to more grown-up La Motte. The choice is yours… 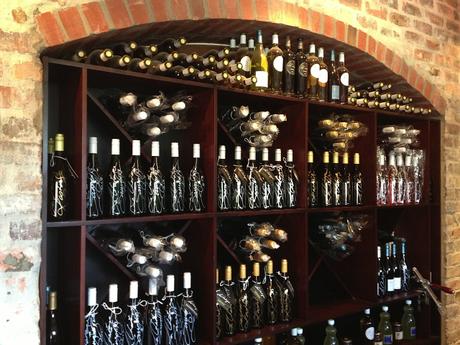 La Chataigne, just down the road, intrigued us too – not least because the winemaker there is one of the owners at Four Paws. And their Sauvignon Blanc, indeed all their wines, were very palatable and good value. Indeed, they were the only ones we parted with money for, which says as much about the people as the wine, in truth. Very friendly people, a rustically stylish tasting room, amusingly packaged wines (all scripted, in white ink, by the owner!), a boule court, three beautifully located cottages to stay in on the river and home-made marmalade and lemonade – what’s not to like?

Finally, we headed on to Lynx, where we were a little disappointed by the rather corny Mexican theme and the less than amazing food, especially the very rubbery calamari. Not good. This detracted from their wines, which are highly regarded – and, indeed, they were several notches better than their food: the reds, especially. They also do a lean and surprisingly refreshing Viognier, to which they were offering a sneak pre-launch preview: definitely worth watching as it avoids the overblown apricotness many single varietal Viogniers suffer from.

So, all in all, many new discoveries - crossing the bridge to Four Paws being chief amongst them - and some rediscoveries, like that view at Haute Cabriere. An excellent addition to the ongoing adventure that is foodie capital Franschhoek.

Best thing about it? New wine discoveries and discount bargains, together with a wonderfully scenic setting and bearable heat
Adults or children? Mostly adult-oriented: some wine farms are child-friendly, but we didn’t see many
Red or white? Absolutely both, though the emphasis is on reds – and bubbles too
Food or drink? Both: that’s the idea and pretty well every farm had food on offer, even if they didn’t have full-time restaurants
Best time to go? To Franschhoek Uncorked: only once a year over one weekend, sadly, so you’ll have to wait till next September; but Franschhoek has many memorable festivals throughout the year and is worth visiting any time for that matter

A comet fades, a bright star stays behind →